If there was ever a time when Nigeria needed unity, that time is now. There is mistrust between the component units and the upcoming general elections in 2023 have further deepened the schism. Social media is not a pleasant place to be now, with vile attacks on each other by supporters of various politicians further fueling disunity. People attack each other because of their religion and ethnicity, which is inappropriate.

There are bigger federations than Nigeria, but they manage their differences better. They have, over time, found a way to make their federalism work and have used their diversity better than Nigeria, where unity is elusive. In this context, “Echoes of the Drums”, staged by the National Troupe of Nigeria (NTN) a few days before the 62nd anniversary of the country’s independence, was a good omen.

Written by journalist and playwright Ola Awakan and directed by Mike Anyanwu, the play fulfilled one of NTN’s goals: to stage productions focused on national aspirations. Celebrating love, brotherhood, unity, coexistence and hope, ‘Echoes of the Drums’ presented at the MUSON Centre, Onikan, was a competent production for the present day.

The presence of parastatal business leaders under the Ministry of Tourism and Culture, including the Director General of the Center for Black and African Arts and Civilization, OlubunmiAmao, the National Board of Film and Video Censors, Dayo Thomas and the Director General of the National Commission for Museums and Monuments, Professor Abba Isa Tijani and others further underscored the production’s unity and message of love.

A ‘total theatre’ production, ‘Echoes of the Drums’ is an exciting mix of drumming, singing, dancing and chanting performed by Ilu Ayan, the drumming clan. Abayan, the clan leader, is blessed with triplets, but his wife dies soon after. He is then left alone to take care of the boys, Awogbola, Onlude and Ayanlade. He tries to uplift them as upright and hardworking men who follow in his footsteps.

Abayan teaches his children the invocative and therapeutic power of drums and music. They also grow up as excellent drummers, having learned all the basics of traditional drumming and the secrets of the sacred drums. Having learned all they could from their father, the triplets decide to explore the world and learn more about nature, drumming, and the drumming cultures of other lands. They go on an adventure and, predictably, encounter forest dwellers, gnomes, and spirits, among others.

They overcome challenges until mistrust and disagreements lead to conflict. The trio decide to go their separate ways, saying that fortune will favor the brave and if the ancestors so decree, they will meet again. Each encounters different obstacles but overcomes them until the final obstacle when the spirits of the forest gang up on them. The intervention of Sango, the music-loving and dancing god, saves them. They realize then that they could have done better and accomplished more if they had remained united. 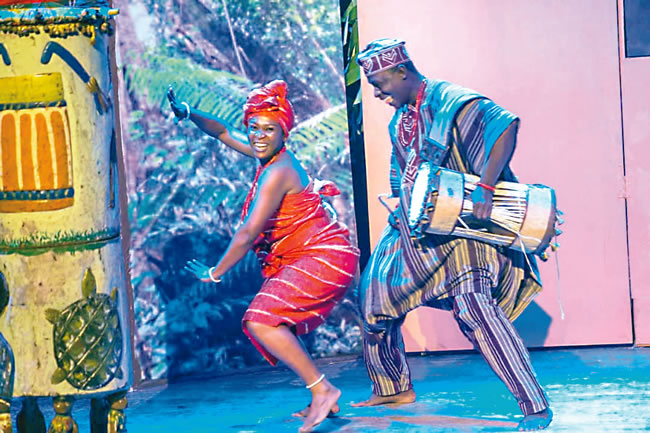 The triplets encounter different cultures and beings on their quest, but believe so much in drums, noting that “the echoes of the drums will always unite us”. This proved true in the piece which opened with moving chants praising the drum and its variations. “Anigilaje, okuewure to n fohun bi eniyan,” the cantor noted, praising the drums. The piece, originally written in 2005, also stylishly highlights the therapeutic properties of drums and drums, showcasing the rich history of drumming in Africa.

As the triplets realized they were good together after the forest spirits attacked, promoters of separation ahead of next year’s general election should know that we are stronger together. It is true that our current form of federalism poses systemic problems. We could do with a better set of leaders; we are even better together. Proponents of separation should be discouraged, while we should tell the elite of the political class that we will no longer be pawns in their quest for power.

The play, NTN’s second production under the direction of Ahmed Mohammed Ahmed, affirms the artistic director’s seriousness in restoring the glory of the troupe, which was in a coma before his arrival. After serving a pleasant Independence Day meal, theatergoers eagerly await its Christmas production.