A group RANGERS-daft are set to release a special single dedicated to their Europa League heroes.

SAINT PHNX, along with brothers Stevie and Alan Jukes, was present for the semi-final win over RB Leipzig last week and admits he was inspired by the heroic efforts of the players.

The Ibrox club appear to have fully endorsed the track after the band – who previously performed Blue Sea of ​​Ibrox and performed in a fan zone outside the stadium – released a teaser to fans earlier in the day on TikTok.

They had given supporters control over the future of the track by asking their opinion on an official publication ahead of the final against Eintracht Frankfurt in Seville on Wednesday.

As Rangers quoted the short clip on Twitter and posted: ‘This is class we should do something together.’

The band then gave fans an update tonight where they revealed, “Working with our label to get this out ASAP! We only finished it today. 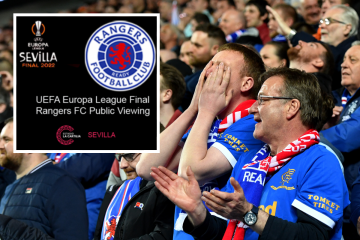 In their initial message, they said: “As you may or may not know, we are Glasgow Rangers fans and we are in the Europa League final.

“So we were in the semi-finals last week and we saw it happen.

“We were so inspired by it that we decided to write a little song.

“They then take viewers behind the scenes of their recording process and explain how they chose the guitar, drums and vocals.

There are also several references to the lyrics of the track which appears to be called Make Us Dream.

One of the verses reads: “Under the lights of Glasgow the narrow streets are blue and white, they lead me to a place where I belong.”

As the chorus declares “now that you have giants at your feet, you hear the call of history”.

After asking fans if they should release the track, it seems the response was pretty unanimous.

One fan said: “What a melody!!! This must be played on Wednesday, you are the class

Another added: “I can already imagine hearing it at Ibrox.”

One cheering fan joked, “If you don’t release this don’t come back man, I need this in my life, amazing guys.”

While another even requested that they sing it in Spain, adding: “Great guys, take the stage in Seville and entertain the biggest fans in the world, you are pure class. Just what we need.